While we were inviting musical guests to join us for the Band’s Last Waltz concert, Levon suggested Muddy Waters. We had always been big admirers of his music, and were unquestionably influenced by...Read More »

The dregs of society become industrial music zombies running through an NYC tenement, driven to madness by Daniel Davies and Sebastian Robertson in “Condemned” (Lakeshore Records). Chips off the angered, experimental rock block in their relations to Dave Davies and Robbie Robertson, Davies and Robertson fuse a...Read More » 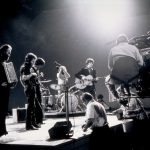 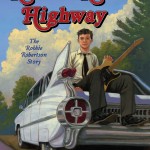 Legends, Icons And Rebels - Music That Changed The World 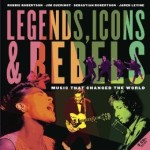 Robbie Robertson and his son Sebastian co-author children’s book, “Legends Icons And Rebels,” with record industry veterans Jim Guerinot and Jared Levine. With 2 CD’s included this book is a road map for parents and children to share some of the greatest musical artists of all time....Read More »

Robbie brings Art and Music together...

The Band’s Robbie Robertson has toured, recorded, composed soundtracks, written dozens of classics, and worked with everyone from Bob Dylan to Neil Diamond. But on September 19th, he ventured into a new arena – an art gallery.

For a limited time you can get a free download of an alternate version of Robbie’s new single Fear Of Falling which features Robbie singing lead on all the verses accompanied by Eric Clapton on the choruses. This is an early mix of the song that was done by Robbie....Read More »

One afternoon more than a decade ago, Robbie Robertson and Eric Clapton were hanging out at Robertson’s Los Angeles studio, when Clapton spotted Robertson’s prized 1927 Martin acoustic guitar in a corner. Before long, they were trading licks. Says Robertson, “I thought, ‘Well, ...Read More »

On the heels of the release of Robbie Robertson’s newest record, How to Become Clairvoyant, comes a limited edition collector’s set, available May 30th and serving as a multi-media capstone to some of the mystical themes behind the album. The set, which Robertson hand-curated, contains extras...Read More »

This morning in Ottawa, Robbie Robertson received the highest honor that his country of Canada bestows upon its natives. An Officer of the Order of Canada. Read more and watch a short video of highlights of the recipients HERE.

It’s been a long time since musical icon Robbie Robertson has stepped into the big bad world of the contemporary record business–and to say he’s been missed would be a significant understatement.
How To Become Clairvoyant, his new album,...Read More »

In celebration of the accomplishment of How To Become Clairvoyant, Robbie Robertson pulled together some of the great songs that didn’t make the record, some alt. version, outtakes and some of the great art, images and ephemera that the record inspired.
Robbie teamed with world renowned artist

Robbie Robertson has a sense about 'How to Become Clairvoyant'

There’s a track on Robbie Robertson‘s new album, “How to Become Clairvoyant,” that’s destined to generate buzz among guitar aficionados, not just for the sincerity with which Robertson pays homage to a...Read More »

LOS ANGELES (Reuters) – Rocker Robbie Robertson is about to add “author” to his lengthy list of professional activities.

The former frontman for The Band said he will start penning his memoirs in a few months following a couple of aborted attempts with ghost writers. The Canadian rocker hopes...Read More »

Robbie's album / To be knighted in Canada

Only after completing his first solo album in more than 10 years did rock icon Robbie Robertson realize he had created the most personal and revealing album of his storied career. “How To Become Clairvoyant” features an impressive array of guests, too, including Eric Clapton, ...Read More »

Robbie Robertson’s prowess at penning poignant, moving songs will be celebrated this spring when he is inducted into the Canadian Songwriters Hall of Fame.

The honour will be the latest such accolade for the Toronto-born musician...Read More »

He Don't Live Here No More

Martin Scorsese and Robbie Robertson are back together for their eighth collaboration.

“Since the first time Marty and I started working together on projects in 1976 (The Last Waltz) and 1980 (Raging Bull) I think this is the first time that Marty has ever called me...Read More »

Robbie’s new song, “How To Become Clairvoyant,” will be featured on the True Blood season 2 soundtrack. This is the first sneak peek at what Robbie’s first release in over 10 years will sound like. Read about the soundtrack HERE.